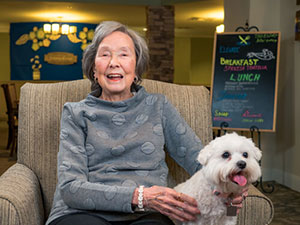 For just a moment, imagine you are 95, you live in memory care and you’ve got Alzheimer’s Disease. This is Carol’s truth. Around her 95th birthday, she told her daughter she always wanted to be a model envisioning gowns and everything feminine and beautiful. She imagined this even as she looked around at her comfortable surroundings which was not anything close to the red carpet fame she envisioned. Enter Doggies for Dementia!

Carol married and raised 3 children. Her deceased husband was a war vet and former POW. The stories she and Robbie shared made me wish I could’ve met him! Carol lived a good life and eventually moved to Florida to enjoy the life of a retiree. About 3-4 years ago, her family noticed forgetfulness and had concerns about whether she could care for herself in Florida. Alzheimer’s Disease slowly robbed her independence. Her grown children helped her move to Georgetown, Texas. She has been well cared for by her daughter Robbie and the good people at The Legacy at Georgetown Senior Living. They are also Doggies for Dementia sponsors for November 2019, Alzheimer’s Awareness Month. 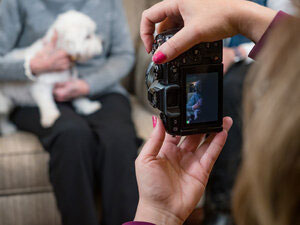 When I approached Carissa Fawley and Shilpa Patel at the Legacy at Georgetown, they loved the idea of Doggies for Dementia. Doggies for Dementia is a program where I photograph and videotape people impacted by Alzheimer’s Disease and related dementias.

A dog is part of the mix because natural, candid photography, my style, is much easier to achieve when the innocent sweetness, clever antics, and downright hilarious actions of a dog are added. The person with Alzheimer’s Disease doesn’t have to do anything but be themselves. There is no need to pretend to understand or remember. My agenda is simple: whatever happens, is meant to be captured.

They knew Carol was going to be a perfect model for us. She is about as girly as I am, loves the glitter and sparkle, and is comfortable on camera. After she told her daughter about her dream to be a model, the gears in my head started turning. I remember thinking, “hmmm, she will be a hit on social media, but she won’t realize it since she isn’t on the computer. She will have the photo session, but no real evidence of her modeling.” I wanted her to have something to remind her every day. Plans snowballed, and I can only imagine the fear Carissa and Robbie, Carol’s daughter, felt when they saw an email come in from me!

A red carpet event was planned with the residents of The Legacy at Georgetown and invited guests to join us. We planned it during happy hour on a Friday evening, November 15, 2019. Normally, the ‘reveal’ when I show families their video/slideshow and their photos are more of a private affair. November is Alzheimer’s Awareness Month and the perfect time to make a big deal out of this.

I typically send out a press release and announcements to both local and national outlets about the Doggies for Dementia session. I pay for this to have a wide distribution to the media outlets who might be interested. Given the nature of Carol’s session, I also sent emails, Facebook messages, and pretty much any way I might reach the local media. I hired Laurie Farmer, a former journalist, to write the press release. She knew what she was doing! I won’t pretend to be a writer!

Carol and Doggies for Dementia in the News!

The morning of Carol’s photo session, it was pouring rain – the kind that blows sideways – so being under the carport with a raincoat and umbrella didn’t quite do the trick. What I’m trying to say is it was a very bad hair day. I’m still feeling great because I got some great shots of Carol getting her hair and makeup done and she wore an outfit purchased in local Georgetown the week before. I joined her for this outing too. We were all set and even arranged to have Shannon Lanni join us to get some behind the scenes footage. Then it happened…a voice mail from Hank Cavagnaro with KVUE (ABC in Austin, TX) telling me he had plans to join us so long as nobody called in sick to the station. While Carol was given the star treatment with hair and makeup, I photographed and waited to hear back. Twenty minutes later, I got the text saying we are on, and he was heading to Georgetown. It aired 11/7/19 on the 5 pm news, and I was glued to my TV screen-not even caring that my face needed blotting and my hair had been rained soaked. It was perfect!

Doggies for Dementia & Carol on KVUE 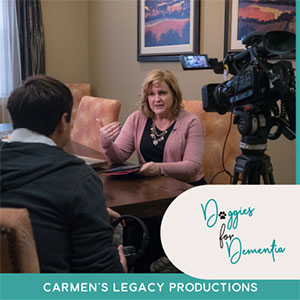 Chris Davis with KXAN, Austin, TX and Carmen with Doggies for Dementia

The day before our big reveal on November 15th, Chris Davis with KXAN (NBC in Austin, TX) called and asked for an interview. Hey, I had time to primp a bit. Did I practice what I would say? This program, Carol’s special session and what it all means just comes flowing out of my mouth. Consider this a warning for anyone who asks!

Doggies for Dementia & Carol on KXAN

Thought and visions of the families I cared for during my decades of nursing, the thirteen families in my book, Just See Me-Sacred Stories From the Other Side of Dementia and the others who have been so courageous to share their stories to help others weighed heavy on my heart. Thinking of them made any media attention a breeze.

Why Media Attention is So Important to Doggies for Dementia. Raising Awareness and Getting Rid of Stigma

Doggies for Dementia is a program with two main intentions. One is to gift families the experience and photos they wouldn’t otherwise have. There is no cost to families for the sessions, and I give them at least 6 professionally matted portraits. I wasn’t prepared for the response I’ve experienced. The second intention is to raise awareness for Alzheimer’s Disease and related dementias. This is how we help people to understand the disease and reduce the stigma. The loneliness and isolation cause emotional pain equated to the damage of smoking a pack of cigarettes a day. It’s a HUGE problem. Adding dogs to the images helps us to stop people from scrolling right by the pics on social media. I think it’s brilliant, but hey, I’m biased. 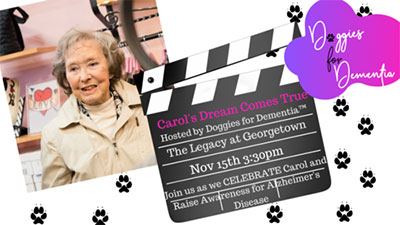 How did Carol’s red carpet premiere go? It was beautiful. She was surprised, and her daughter was so touched by the video/slideshow and entire experience. Carol didn’t remember me joining in on her shopping day, the session with the dogs, or the TV interviews, so it was all new to her. She remembered me, but not why I was there or my name. I had a blast working with Robbie, Carol, and the whole gang at The Legacy at Georgetown. Without sponsors, Doggies for Dementia couldn’t grow or become as impactful as I envision. We put our heads together, planned, shared the excitement, and then celebrated the success which was an unexpected bonus for me.

This is the video/slideshow community guests, residents, care staff, Carol, Robbie, and I enjoyed at Carol’s Premiere.

Carol had beautiful things to say about her daughter, Robbie on the video, which was a surprise for her. I had no idea the impact Carol’s words would have though. I’m going to save this for another blog because it is so important for all of us to hear. You can see a bit of it in the video. While I post more social media his is the version typical of what families receive.

Huge thanks to The Legacy at Georgetown for their sponsorship and following the lead not knowing how it would go!.

I cannot write the words needed to fully express my gratitude to Carol and Robbie for their courage to share their stories-past and current with the world. In the beginning, I told Robbie she could be in the photos as much as she wanted. I promised she wouldn’t need to be in many…and then the various cameras lined up- mine, Shannon with behind the scenes and KVUE and KXAN who of course wanted to talk with her. Robbie was everywhere! You know what? She did it with such heartfelt honesty and humility, that I know anybody who saw it just couldn’t help but fall in love.